So, you’ve already learned nose-to-hand touch, and if you’ve got a young nose bopper, they’ll have taken to it straight away. Why would you also want a chin target?

The answer is pretty simple. A nose touch is great fun for bopping. But generally, I’ve found it pretty hard to get a sustained nose target where your dog holds their nose there for a longer period of time. For masters of clicker training, it’s fine. If you’ve got great timing and a patient dog, you can prolong those nose targets for longer and longer periods.

But for us mere mortals with shouty dogs or teenage dogs, it’s not so easy.

I think there’s a reason for that. I want you to imagine those poor children in the past who were sent to stand in the corner as a punishment. Not looking at things and being up close to a surface is not pleasant in itself. I think Lidy likes bopping things with her nose. She bops me with her nose often enough. But to train her to sustain that nose targeting would be hard work and not particularly rewarding for either of us. It’d be like standing in the corner with nothing to see as a punishment.

A chin target is much less difficult in that it asks the dog to do something that is much less unpleasant in itself. Therefore, I think the psychology behind why it’s easier to build it up so your dog can hold their head there is much more straightforward: it’s not unpleasant. They can see you. You can get eye contact with them. They have more freedom to see the world around them.

Chin targeting to a hand is sometimes called a ‘calming chin target’. In reality there’s nothing particularly calming about it. It just asks a dog to hold a position. But it has the bonus of calming too, for many dogs. It’s all that being still.

Because we mere mortals can get a sustained chin target more easily, where we want to keep a dog in place, it’s great for getting your dog to be still. Chin targeting is great for vet visits, animal husbandry, clipping nails, and it can be pretty cute if you train it to other places as well. Who can resist a dog who comes up and places their chin on your lap? It’s an inoffensive and quite charming way to get attention in ways that don’t involve barking, dancing, humping, yapping, pawing or mouthing. If you have a dog who likes to get your attention, it is a nice target to teach, providing you have a dog at the right height! If you have a little dog, you can also teach them to target to a foot.

This is Chirag Patel using what I’d say is a half and half chin/nose target for vet stuff… so you can see how useful it is. Also a very good one to teach for muzzle training too.

Since the dog can remove their head at any point (it’s their choice to place it there), you can then use it for consent with handling, vaccinations and so on. It stops their eyes wandering and minimises panic. A chin targeted on my hand is a way of communicating between you. Your dog’s head on your hand is a way for your dog to say, “this is okay. I’m fine with this.”

It’s also nice for many dogs too, because many dogs like the under chin petting or scratching. They seem to prefer it much more than the old pat on the head that so many people are so fond of.

Most of us are just going to use this to encourage calm behaviours especially around distractions, but it can be good also for therapy dogs or assistance dogs.

For chin targeting, you need a good cue. You can, of course, use ‘chin’, but if you’re going to teach ‘spin’ later, you might want something less similar. Luckily, the actions are very different, so it’s not perhaps as confusing as ‘down’ and ‘bow’, for example.

I use the word ‘place’ for Lidy and Heston. Amigo’s cue was ‘Be Cute!’ as he targeted my knees with his chin. I use ‘Chin’ with Tilly because I have no desire or need to teach her how to spin, and I taught her last. I have no idea why I didn’t stick with ‘place’, but that’s humans for you. You can have different cues for different places you want the dog to target. I think ‘Be cute!’ would be a nice one to follow on from ‘Place!’ or ‘Chin!’

You will need also to make sure that your dog knows what to do with the rest of its body. Do you want them to sit, stand or lie down? A down and a chin target on your knee leaves your hands free for all sorts of things. You can ask for a down and then a chin target very easily.

Chin targets are another way, along with Watch! or a nose target, that you can keep your dog focused on you if they are aggressive, reactive or fearful. If you have an over-excited dog, it can help with that too. I really like this behaviour for fearful dogs: it really seems to offer them security to have that contact, but you may need to do a little work to get them used to your hand approaching them.

Since you need your dog to be calm, you may need to think about what you’re using as reinforcement and how you are marking the behaviour you like. If the food is really too overexciting, you can use less valuable food, or try this after they’ve had a good meal with some of their regular food as the reward. Using a toy is not particularly a good tactic unless you are working with a super-focused dog who has impulse control in the bag. Not impossible but one to save for those times where you want to give more of a challenge.

Remember, don’t lean over your dog or crowd them.

If your dog already has a good hand touch, it’s easy to slip your other hand under their chin and hold your target hand a little away from their nose. You can also use your Wait! or your Watch! commands as part of it. It’s easy to lure the behaviour at the beginning to help your dog understand what behaviour you want them to do.

You may find, as with a nose-to-hand target, that your dog tries to paw you, especially if they’ve already learned ‘paw’ as a command. This is why I don’t teach paw until much later in the sequence. Once you’ve taught paw movements, there’s no going back, and it can lead to a lot of trialling with pawing. I find dogs learn to distinguish quickly between this and a nose target, because your hand is in a different position completely. If you have already taught paw, you may find that bringing your dog closer to you so that they can’t move their paw up so easily may help you.

You can also teach your dog to place their chin on other things, like chairs or low tables. As I’ve said, I like a lap target. Can you just imagine if you walked into a busy vet surgery and every dog was docked on their owners’ lap like Amigo was with me? How easy would those vet visits be?!

This great video also shows you how to capture only behaviour where there is no paw offered.

You can also use a mat or towel as part of the learning process too, which will also stop dogs offering the behaviour all the time. As usual, if the behaviour is on cue (ie you only reward it with food or petting when you ask for it) you’ll stop that behaviour popping out willy-nilly, spilling out whenever you don’t want it. Nobody wants a dog coming and sticking its chin on you when you’re fast asleep!

As you can see, it’s a great and versatile behaviour that allows you to do all kinds of animal husbandry and grooming once you’ve built it up. It’s also one of the most endearing ways to teach your dog a polite way to get your attention. A dog who jumps all over you isn’t great, but a dog who places his chin on your lap is a dream. It’s a nice way for your dog to say ‘hi! I’d love a bit of a fuss please!’ 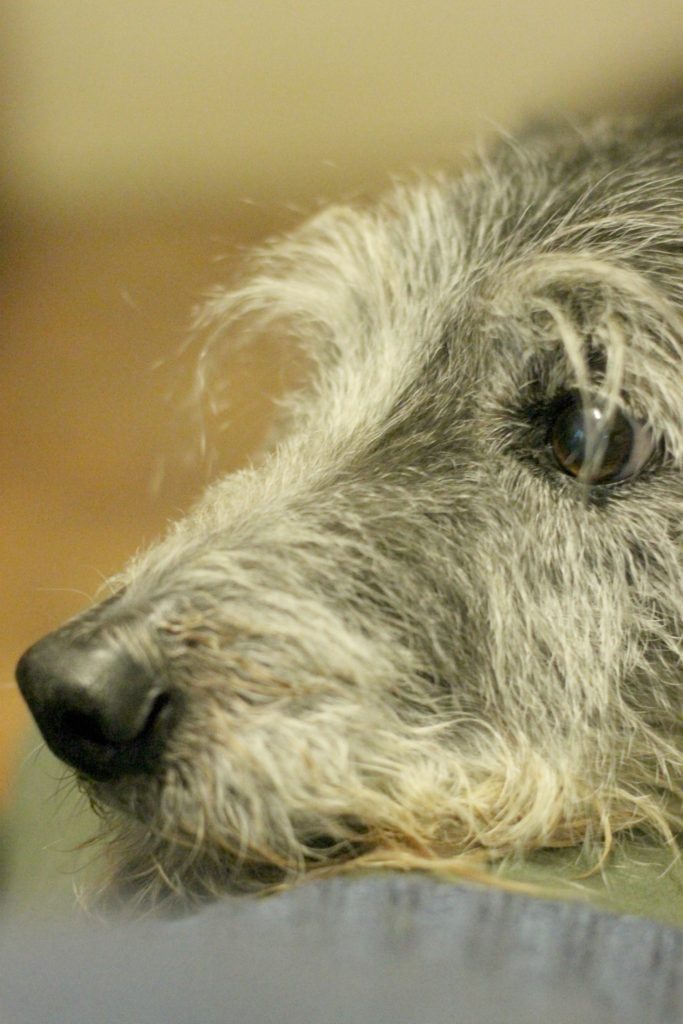 The best chin rest I ever knew.