It’s no secret I love the oldies – Since 2014, I’ve always had a pensioner, or two, or three, milling about the house. Right now, I’ve got Miss Flika Flirty Knickers, whose knee and ankle joints are not at their best. She came to the shelter in pretty poor health – missing eye, cystitis, kidney infection, arthritis and she’d had a stroke one night. I didn’t think she’d still be here nine months later, but she’s still rampaging through retirement without any sign of slowing down.

I’ve also got my little Tilly Popper, who came to me as a 5 year old some 8 years ago, and has been plagued by almost 2 years of ear problems. Started with mites and fungus, cleared up, got other things, and finally in April, a virulent antibiotic-resistant infection that we’re fighting hard. Sadly, with a heart murmur, it’s not easy to clean it out – and the only operation worth doing may not work anyway. Tough call. She had a stroke a month ago, and then another last week. But we’ll see.

Today’s post is about Amigo, my old boy who died back in March. His old age crept up on me after Tobby died in 2016. Barely 2 months after I’d lost Tobby to degenerative neurological problems, Amigo had a stroke one night.

His recovery was slow. Although he was only supposed to be nine years old (I’d adopted him when he was 6, but he came from the pound, so we had no idea really how old he was), the vet realised he was much, much older than that. His balance came and went. His breathing got worse – he had two bullets in his chest from his first life – and pulmonary fibrosis set in. Most of his hearing went with the stroke, if he’d had much before, and it marked a real deterioration in both his mental and physical health.

During the day, he was fine. Happy to trot on walks, if a little happier to bugger off. More time on lead and less time romping through fields. He was slower, too, but not noticeably. Amigo was always the one who told me it was breakfast and it was dinner time. He didn’t bark more, he didn’t seem lost. He just seemed a little older, if anything. As sweet as he’d ever been. 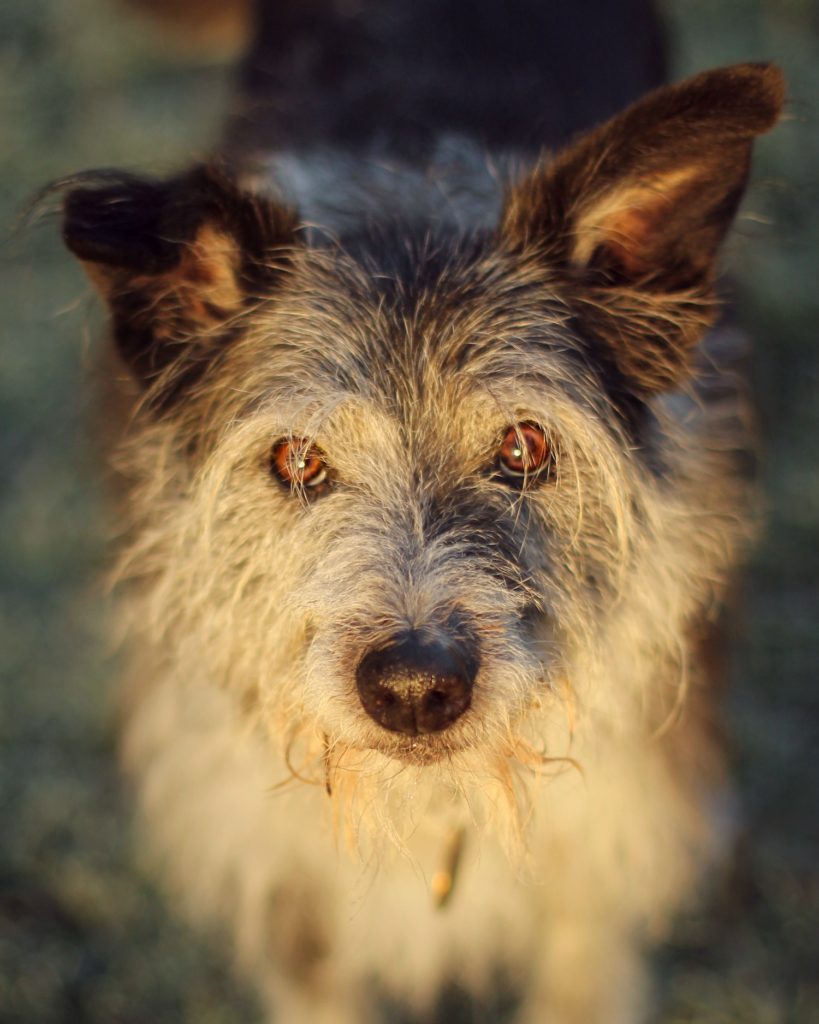 His appetite didn’t change much, although I thought I’d lost him in September 2017 when he had a bout of colitis. We x-rayed him after an ultrasound and I was expecting cancer. I think he sensed the relief in the room when the vet said it was colitis, and he jumped off the x-ray table with all the vigour of a dog who hadn’t just seemed like he was at death’s doorstep.

But it was the night-times that were tough. He’d sleep in the evenings without any issue – happy to curl up next to me while I worked. Come 11pm and he would not settle. The pacing would start. Then the panting. Some nights, he would pace and pace until 2 or 3 in the morning. And he was always up by 5am. After 11pm, he changed. It was like he wasn’t himself any more. He’d try and get in other dogs’ beds – while they were in them! – and even then he wouldn’t settle. Being deaf didn’t help – the others were growling and he couldn’t hear them. I could let him out – he didn’t want to go out. I could pet him – he wasn’t bothered. He just wandered and wandered.

Eventually, I got a salt lamp. Whilst I’m not some ancient hippy believing every alternative health story, the pink light was better than leaving lamps on all over the house so that Amigo didn’t fall on things or crash into other dogs. It was certainly better than trying to confine him, which made him much more distressed. It was also better for my sleep than leaving lamps on. Whether it’s hocus pocus or not, there is some small-scale evidence that these can help with mood in animals. And if it’s hocus pocus, the low light wasn’t offensive so I could get some sleep at least.

That lamp also stopped him crashing into other dogs, at least. And on the nights he had an accident, it also stopped me slipping in it afterwards. Always a bonus. Obviously, keep them out of reach of dogs tripping on them or licking them – that goes without saying.

Because it was related to sleep, I also tried some sleep aids with the guidance of my vet. We didn’t want to sedate him, so it wasn’t a case of giving him a sedative like valium (although I had some of that here for other health issues for him) Melatonin had some effect and it certainly fitted with other things, like his alopecia. Don’t try it without checking with your vet: there are potential side-effects especially for diabetic dogs or those with a heart condition.

A vet friend of mine had also recommended MSM for another of my dogs who was suffering from arthritis. He says that a lot of the supplements we give are for mobility but are not anti-inflammatory as such, and offer no pain relief. It’s not a medical anti-inflammatory, that’s for sure, but the nights when I’d given him MSM seemed to be the most peaceful ones. There are some small-scale studies which are ‘limited but encouraging’ and it certainly seemed to help with both his hair, his movement and his night-time restlessness.

There are other sleep aids you may want to try out in discussion with a holistic veterinary practitioner. Valerian and passionflower were two I tried. I didn’t see any difference, but that’s just one dog. Zylkène, Nutracalm, Pet Remedy, Adaptil and Anxitane may also help with anxiety, and it’s worth checking them out with your vet.

Also, like a baby, I figured it was also about poor sleep training. He was sleeping when he should have been active in the early mornings and at dusk, and then not sleeping through the night. So I made sure he had a good amount of physical exercise – not too much because I didn’t want him restless because he was hyped up on adrenaline or because his knackered old body hurt – but I tried to make sure he had a little trot about about an hour before bed. I also made sure he had plenty of mental enrichment, and I’ll tell you about that later.

However, it’s important to remember that you can tire your dog out and you can give them natural (or pharmaceutical) sedatives and sleep aids, but it doesn’t get to the underlying causes. Sometimes that’s canine cognitive dysfunction (and you can get supplements for that too) but often it’s a physical thing. When I could see on the x-ray the shrinking size of Amigo’s stomach as his lungs expanded as a result of fibrosis, his colitis was without doubt worsened by the fact that his whole body was out of sync. He often had tummy ache. I wonder how often the wandering and restlessness was caused by gastro-intestinal problems. I had trapped wind last night (overshare!) and I was restless.

Sometimes that wandering is caused by pain, so a comfortable bed can help with that. That said, both of my oldies who’ve had crippling arthritis have both been ‘go to bed  – stay in bed’ types. I often wondered whether Amigo’s bed hopping was related to the need to find the most comfortable sleeping spot.  Sometimes I think we overlook the physical problems that may be causing our dogs restlessness, thinking it’s cognitive decline when in fact, they’re just uncomfortable. Pain relief can be a really important factor in treating sleeplessness.

That said, many dogs do suffer from cognitive decline, and pharmaceuticals do exist to help with that. Sedatives aren’t the only option. Anti-anxiety medication or anti-depressants can be prescribed by your vet if they suspect it may help. Remember these are not sedatives and they won’t change your dog overnight. Prozac and Selgian are two pharmaceuticals you may find your vet prescribing to help with other cognitive issues.

Just as mental enrichment and stimulation can slow down decline in humans, so it can in animals. Where his body couldn’t cope with physical activity in the same way as it had when he was younger, I put in lots of mental enrichment. From Sprinkles to Kongs, food toys to snuffle mats, Pickpockets to puzzle toys, hide-and-seek to scent work, trick training and husbandry training kept his mind busy and allowed me to keep him occupied as well as track decline. Forgetting learned tricks is a quick way to see that decline is setting in. 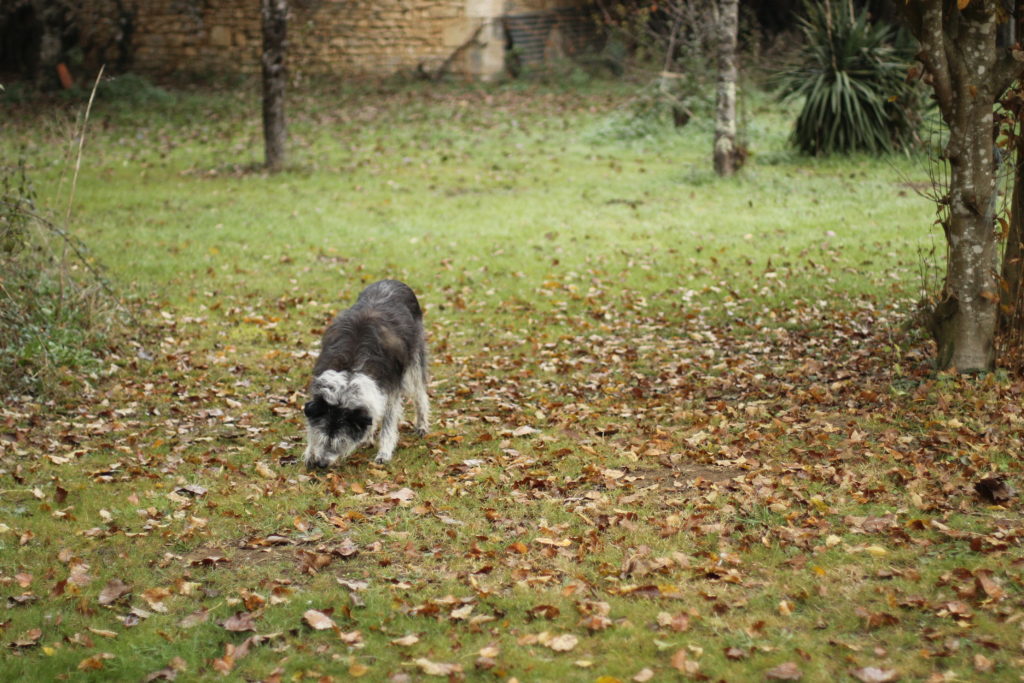 We played lots of games outside to keep him occupied, and lots of slow ‘sniffari’ walks too.

Mental enrichment not only helps re-train your dog to better sleep patterns, but also uses up some of that mental energy they don’t use up through physical activity as they used to. It also keeps them thinking, seeking, puzzling. It keeps them curious. It was a vital part of our old age regime and continues to be so for Flika and Tilly. Just because they spend a lot of time asleep doesn’t mean they are well-occupied.

It’s also all very well to speak about how wonderful it is to love a dog with canine cognitive dysfunction, but we also have to remember that it is hard. We are not saints. It’s often frustrating and depressing. Taking care of yourself is vital. If that means finding a pet-sitter so you can catch up on some sleep yourself, then do it. Some of the best nights I had were when I had taken all those sleep supplements and left Amigo, securely, to wander. It’s a long journey with a sad destination, and that’s not made any easier if you are exhausted and upset. Remember to look after yourself. In the long run, Amigo’s decline happened over 14 months. That’s a long time for any human to be sleep-deprived. Be kind to yourself and to your dog. Use sitters and use your friends/family to help you out: you would if you were dealing with a newborn.

Finally, Eileen Anderson’s wonderful book, Remember Me? is an absolute must-read for anyone with an ageing dog. You can buy it on Kindle if you don’t want a physical copy. For well-researched information about diet, housing, medication and much, much more, it’s a real treasure to have at your side as you navigate the problems that age-related cognitive decline can pose.