I bet you’re wondering how I can possibly think “Take it!” is a useful trick to stop behaviour problems. Surely it’s just part of playing fetch? It’s just one of those things that retrievers naturally do right? What possible relevance can it have as a behaviour that is useful or functional to help avoid problem behaviours with your dog?

If you have a dog who is over-excited or over-aroused and bites the lead… if you have a nippy shepherd or heeler… if you have a sighthound who likes to chase small furry things, or a labrador who is pining for dead ducks that he has never been taught to retrieve, “Take it!” is a really useful behaviour. It’s also a great behaviour for muscle memory and for dogs who need to learn to use their mouths more gently and as such it’s a really good way to help your dog actively learn to moderate their bite strength.

For a dog, a mouth is the equivalent of their hands… good for grabbing stuff, investigating, prising things open, carrying stuff off, holding your shoes whilst they run off with them. Teaching “Take it!” is a really useful behaviour to make sure your dog knows what to take and what not to. I’d put a caution on this: be careful you don’t unleash a monster. Some dogs need little excuse to practise what is essentially a smash-and-grab. You might want to make sure your “Drop!”, your “Leave it!” and your “Wait!” are really solid behaviours. I was doing nose targets with Lidy at the shelter the other day, and she got hold of my target spoon… needless to say, a good “Drop!” and “Leave it!” helped avoid a mouthful of splinters. That’s why you need to teach them and proof them first. 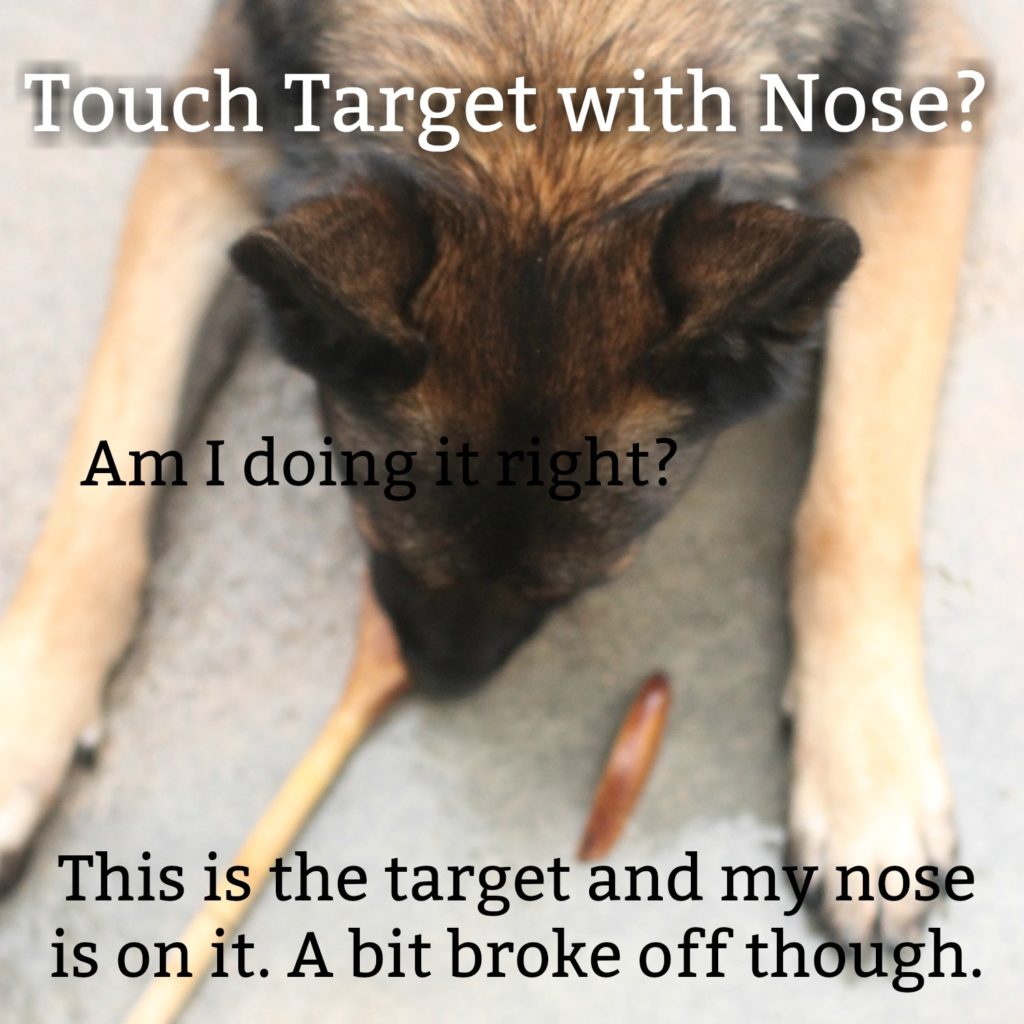 And you can see why, having already learned “Drop!” they’re ready to learn to hold items.

Beyond retrieves, taking an object and holding it in the mouth is absolutely vital if you have a mouthy dog. It’s not a cure-all, but if you’re obsessed with carrying your toy, you aren’t a) overaroused and biting your lead, b) as able to bite joggers/bikes/skateboards and so on. Notice I said it’s not a cure all and your dog isn’t as able. Nothing stopping a dog dropping what’s in their mouth, but it often avoids a lot of problems if your mouthy dog loves carrying things around. Mouth is busy, mouth not doing bitey things. 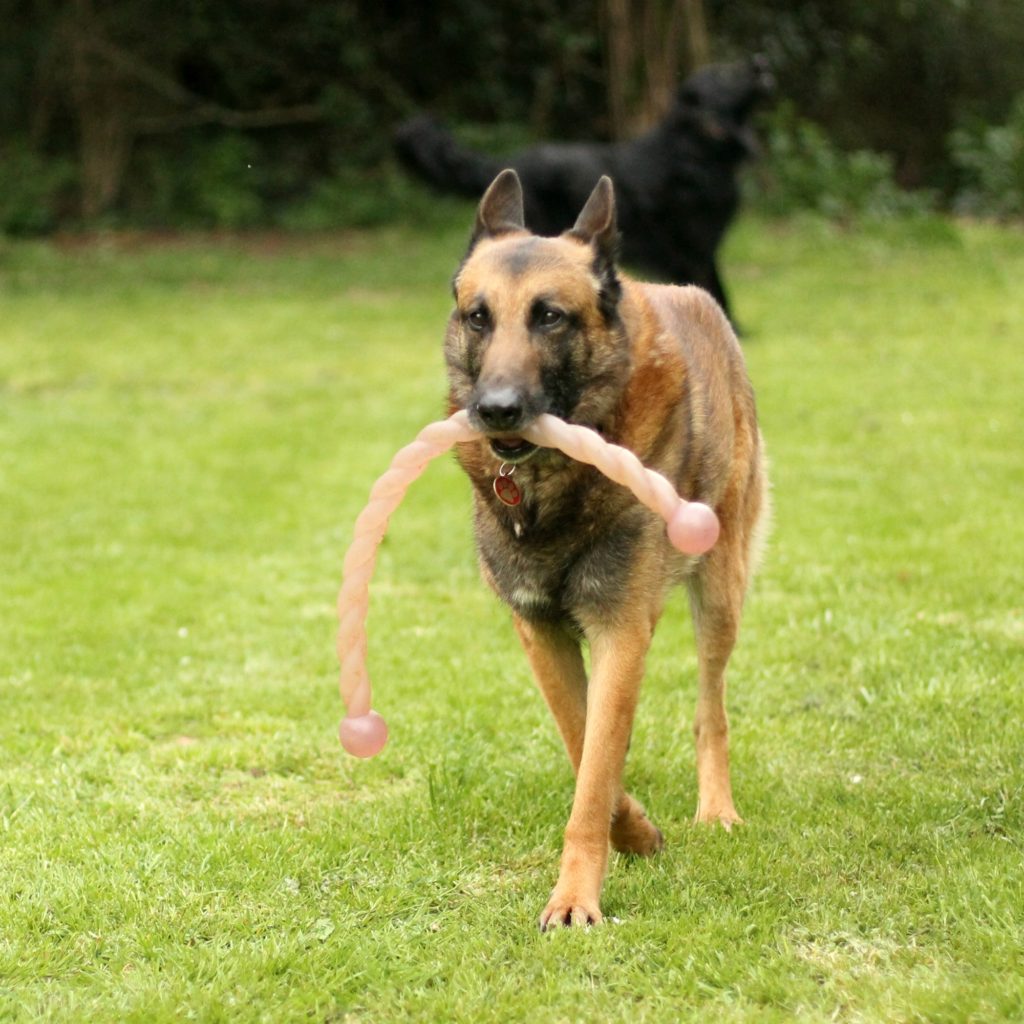 I’m not a fan of lead-biting, though I know some people aren’t as bothered about it. I’ve seen it end very badly a few times, not least because the dog has got control of the lead. The only time I’ve ever had an accidental escape at the shelter when walking a dog was a lead-biting beagle cross called Jonny. And if you think a dog won’t chew a metal lead, you’re very much mistaken. I’ve seen young dogs with a mouthful of worn teeth from biting metal chains. Some people have tried all kinds of things for lead biters, including cones and muzzles, but believe me, it’s MUCH easier to teach a ‘hold’ to a dog (which is fun and reinforcing) than it is to get them to come and put a harness on, a muzzle and a cone. Plus you can use toys that are gentler on the teeth.

If you are going to do heelwork, obedience, ring or other dog sports, a “Take it!” and hold is going to be vital too. Plus, it’s the first step in an awful lot of interactive toy play. If you have a puppy, it’s going to be a vital part of being able to redirect them onto appropriate things to bite, mouth and chew.

Whilst it’s natural for dogs to pick some items up with their mouths, or bite some other items, holding other things is not so natural. Plastic, fabric and metal are not the same as wood. Some dogs are just not as easy to teach to “take” or “hold” as others. Be aware that if you try to use force or coercion, your dog may not enjoy this move, so don’t force things into your dog’s mouth.

For dogs who don’t take to it as naturally, you may want to start with food items and chews. Even if you have a dog who is used to holding things in their mouth, you know they have preferences. Heston is a fan of squeaky toys and balls, or rope tugs. Not a fan of the very excellent Puller toys or frisbees. He has about ten frisbees and he hates them all. Lidy loves fabric things, towels and soft stuff, but she also loves the Puller. Tobby came here with his sad little rope toy that he’d assiduously put down to eat, to pee or to sleep. Needless to say, it stank to high heaven and soon went in the bin.

If you have a very reluctant dog, start with a long food chew. Reward them for being interested in it, looking towards it, moving towards it, touching it with their nose, mouthing it.

You can see this great video for dogs who don’t mouth things at all.

To make it more complex, you can then add unusual items

You can see that Emily Larlham is using “Touch!” too – something your dog should already know if you’re following these training tips in sequence.

You can make it more challenging by asking for a retrieve to another place, like a basketball hoop, a wastepaper bin or even their toybox

Now you can see how useful it is to get your animals to get them to tidy up!

Donna Hill has some great examples here of the items you might want to use:

Picking up leads or gloves, emptying the dryer, putting socks in a linen basket, help you pull your socks off … your dog can use this behaviour to really help you out! Like Donna, I also use “Thank you!” as my cue to ‘give to hand’. It’s different for me than “Drop!” which I use for ‘spit it on the floor’. Don’t expect your dog to release an item to your hand just because you’ve got “Drop!” as a flawless behaviour.

Taking, holding and carrying an item are not just great for avoiding problem situations, they are the basis of so many dog sports. If you’re a flirt pole fan, if you’re a disc dog addict, if you are teaching blind retrieves to your labrador, if you’re just playing “Fetch!” in the garden, it’s the basis of so many dog sports that it’s a great way to get your dog to let off a bit of steam in a productive and fun way.

And just for fun, here is Effel, who I had in foster for a while… He arrived here aged 7 with a very lovely lawnmower-biting habit, and a nipping when excited habit. He had never played in his life and had no behaviours that he’d learned… but just to show that you can teach an old dog, new tricks, this is the first time I stitched together those orient-chase-return-hold behaviours. We started with an easy object (not a fan of tennis balls usually but Effel had only been chasing and nosing up to this point) and it might have taken him a few months to master all the parts of fetching a ball, but once he had it, he was a master!

There is an added benefit to ‘Take it!’ that few people think about… when your dog knows only to take things when given a cue, then they don’t think the universe is a huge free-for-all. Instead of spending all your time telling your dog to ‘Leave it!’ for ninety gamillion objects in the universe, you can tell them what you DO what them to take. It’s much easier on the handler when you have a dog who knows not to interact with the universe unless given express permission.

So get out there and start working on your holds!