This week, I had a little dog on a foster placement. “She’s dominant,” her owner said. I asked a little about this to get behind this rather too-often-used statement, and it seems that Little Miss likes to growl and snap when the other household dog was getting attention and she was not. It didn’t take long for this so-called “dominant” behaviour to emerge at my house; I was eating a pizza at the table and Little Miss sat under my chair like a troll beneath a bridge and snapped at anyone who tried to get near.

She’s not the only dog who has behaviour issues. Last Saturday a lady in a photography group I’m part of shared a terrifying story. Her dogs were eating in separate rooms as usual, when one rescue dog turned on another as she walked behind him towards his food bowl. The size difference meant that the ‘intruder’ had her jaw broken and the owner was devastated.

Then on Tuesday, I got a call from a guy who’d adopted a dog from us a few weeks ago. In fact, it wasn’t a query about the dog he’d adopted from us, but the dog he’d adopted a few months earlier from another refuge. He would happily steal items of clothing, run off into the sunset with them and growl or snap at anyone who tried to remove them from him. What could he do?

It might seem that these three things are not particularly related, but they have one thing in common. Resources. Whether it is food, toys, bedding, other animals or even human beings, some dogs haven’t yet learned to “Leave it!” with good grace, whatever “it” might be. 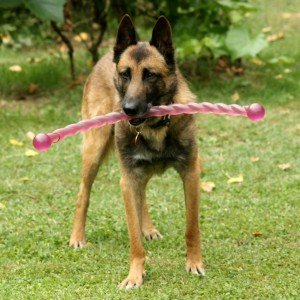 Let me make this clear: resource guarding is NOT dominant behaviour. I don’t like the word ‘dominance’ anyway in the dog world because so often we mean other things; I just can’t get my head around the ‘dogs want to rule over humans’ idea. Dogs don’t reason particularly well, so I’m pretty sure there’s no master plan at work. Resource guarding is usually the very natural behaviour of an animal which we have been breeding selectively for many thousands of years for – guess what – their excellent guarding behaviours. Long before doorbells, CCTV and on-site security, a guard dog was the best way to have a little security for your sheep, your babies, your treasure or your lap. Now that we’ve removed ‘guarding’ from the job description of most of our canine companions, they’re to be forgiven if they still struggle a little with letting go of things they treasure. After all, we spent thousands of years capturing that behavior, cultivating it and reinforcing it.

Neither is resource-guarding a result of either deprivation or over-indulgence. We simply do not know what makes some items of higher value than others in a dog’s mind, or why they think someone might steal it. But it is still a problem for many dogs and can lead to situations in which the dog feels it must growl, bark or bite to keep hold of its “possessions”.

So how can you treat this worrisome behaviour?

The best point to start ‘treating’ resource guarding is before it appears, when the dog is a puppy. This isn’t always possible with adopted adult dogs, but unless the resource-guarding is very aggressive, you should still be able to apply many of the techniques here.

Puppies should be taught to “leave it!” and learn that humans (and other dogs) can take things from them. “Leave it!” is not just a good technique to use with all dogs to allow you to retrieve items safely, such as food or toys, but it’s also a great command to teach them so that they don’t pick things up off the ground or steal items. Teaching them “off” and that the approach of other dogs, cats or humans is nothing to be scared of is also vital. Grisha Stewart’s explanation of Give or Trade is excellent. Be careful, though. You don’t want your dog to make an association between stealing or guarding and getting a treat. Make sure there is sufficient interruption between “Leave it!” and the moment you reward, otherwise you could easily reinforce this behaviour. You must reward the leaving, not the growling. Good puppy training classes should tackle “Leave it!” as part of the basics. Otherwise, you should seek the advice of a dog trainer to help you.

Older dogs can be taught the techniques in the same way.

Here’s a couple of videos to help you with “Leave it!” and “Drop it!” and ignore the advertising! A guy’s got to make a living after all…

And the fabulous Emily from Kikopup. You can do the same with food bowls too.